Should Your Child Continue On In Montessori 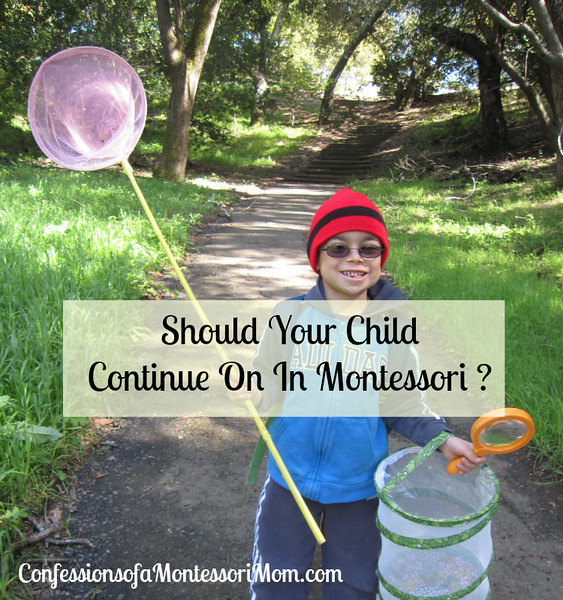 I receive email from time-to-time from parents who question whether or not they should keep their child in Montessori school, especially if the child is five, because the question becomes whether the child should stay in Montessori for their Kindergarten year, or enroll in a public school or non-Montessori private school, enter a Waldorf school, or stay home and be homeschooled. It is a big decision! The following is an email from such a mom:

My almost five-year-old is finishing his second year at a montessori school, and though we love it, I am not sure their approach is what is best for him. He has been building the same words for the past six months [Movable Alphabet] and generally is not motivated to do new harder things because he isn't good at it. He gets the greatest satisfaction out of easier work. The teachers try to get him working on more serious stuff, but it he generally seems bored at school and tells me he doesn't want to go because it's boring. I know that montessori likes everyone to move at their own pace, but he is telling me he is bored and I know that he is not getting the push that he needs to keep things challenging for him.

In a nutshell, this mom was wondering if she should take her child out of the Montessori school and was asking for my opinion on her son's current situation...

Learning to read: In Montessori's view there are two sensitive periods for reading: one at age five and another one at age eight. Keep reading over at my sister blog!
Montessori FAQs Montessori school
Confessions of a Montessori Mom is "a great blog that is fun, interesting and informative. Packed full of information on a range of topics. I love their sense of humor while they are providing well informed and thought out answers to your questions. All in all a great read for any parent!" ~Christine Howard.

Welcome, I'm Lisa Nolan of Confessions of a Montessori Mom and Montessori for the Earth!
Want my Montessori and homeschool activities? Check out my Montessori for birth- to nine-year-olds at [M o n t e s s o r i f o r t h e E a r t h].
If you click on my affiliate product links--and make a purchase, I get a small commission. This helps fund Montessori materials, activities, and books I can get for my special needs son. A big THANK YOU in advance of any purchases you make!~Lisa Nolan