Montessori FAQs About When to Begin Cursive 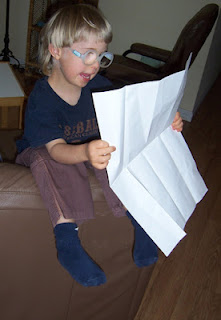 Montessori FAQs About When to Begin Cursive

I have many questions regarding teaching cursive letters. My three-year-old son is in a Montessori school now. However, the teacher is using print letters for teaching him. I personally want my son to learn cursive letters because I know it has many advantages. I have discussed this with the teacher, but she insists on using print letters. Is my son going to be confused because his teacher is teaching printed letters (ball and stick) while I'm teaching cursive letters? Any disadvantages to my son? Also, how can I start?

Developmentally, your three-year-old son might not show any interest in cursive letters, so, be careful. The cursive letters are very abstract, more so than print letters (stick and ball as they are often called). And also, cursive letters are taught for writing. And remember, writing comes BEFORE reading in Montessori.

The window to begin writing is age four to five (and is highest usually at age 4 1/2 and is called "The Writing Explosion" in Montessori schools). That is when you want to teach cursive WRITING. (The child traces the cursive letter and writes it). So to teach cursive now has no meaning, no purpose, because of the age of your child. (And he will probably show little interest in cursive as a result.)

And why are children at age three learning letters (in print)? To build their muscular memory for writing these letters when they are 4 and 4 1/2 and 5 (called indirect preparation). Yes, they are learning the sounds that the letters make, to prepare for phonetic reading when they are 5, but also to spell using the Movable Alphabet when they are 4 and 5 (spelling also comes before reading).


Is learning the letters from tracing the sandpaper letter easier than practicing them with a pencil?

Think of it not as what is easier or harder, but where the child is, developmentally: Pencil writing can start at age 4 to 4 1/2, not 3 or 3 1/2: it could be very difficult for a three-year-old, and as a result, turn the child off to writing when he is older. Tracing letters is an "indirect preparation" for writing print, as well as learning how to spell with the Movable Alphabet and phonetic sounds for reading at age 5.

How can I start cursive?