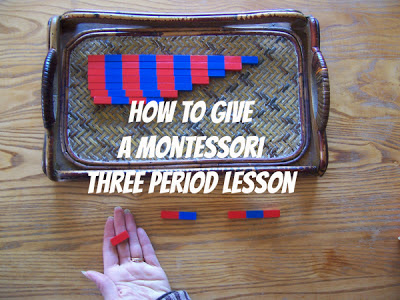 The Three Period Lesson is a way to present and introduce concepts and "new terminology," or the names of things, to a child: new sounds (letters), numbers (symbols), geometric shapes, colors, and geography forms (like the land and water forms or the continents). It is also a way to enrich the child's vocabulary. The technique was originated by Edouard Sequin, a French educator from the nineteenth century.

There are three stages to the Three Period Lesson: the first stage also called the first period, is the association or recognition of identity stage. It is an introduction of names and or concepts to the child. In the example lesson below, the names of three color tablets are introduced to the child: blue, red, and yellow. The names of the objects are introduced by the adult into the consciousness of the child: "This is red. This is blue. And this is yellow." In this first period, the child is making an association with the object and the name of that object.

The third stage or period is the consolidation stage, the child is asked to name the color tablets all on his own, to pull from his mind and into consciousness, the names of the objects (or the colors of the color tablets as in our example). In this period, the child will show the adult whether or not he can identify the names of the new objects, concepts, letters, or numbers, as well as pronounce them correctly.

Few words are spoken during the Three Period Lesson, so as to better isolate the terms or names (blue, red, and yellow for example) that are being introduced and taught to the child.

It is important that the three objects being chosen for a Three Period Lesson be contrasting, or different from each other. For example, presenting the letters "b" and "d" for the first time to a child would not be wise as they are so similar in shape; or the numbers six (6) and nine (9).

The Three Period Lesson can also be used by the adult to test the child's knowledge of the names of things (like colors, numbers, letters, animals, etc.) by asking the child, "What is this?" This is used a lot when teaching a child the letters of the alphabet or numbers. If, for example, you gave a three-period lesson on the numbers "one," "two," and "three" on Monday, you would test the child on Tuesday to see if he remembered the names of the numbers. If he did not remember any of them, you would repeat the Three Period Lesson. If he remembered the "one," for example, but not the "two" or "three," you could either repeat the lesson on just the "two" and the "three," or introduce the number "four" and give a three-period lesson on the "two," "three," and "four." If the child remembered the "one" and the "two," but not the "three," you could either give a lesson on the "two" and "three" or introduce the "four" and the "five" and give a lesson on the "three," "four," and the "five." It is sometimes best to give one familiar object along with two new objects in your three-period lesson.

Three-period lessons given to toddlers and young threes, or special needs children, are sometimes done with only two objects. Both objects can be new (unknown to the child) or one can be familiar and one can be new.

Materials: Small Number Rods (after the child knows how to put them in order from one to ten or one to five).

2. Place the second rod in front of the child. "This is two: One, two." (Touch your fingers on the red as you say one and the blue as you say two, and count from left to right.) "Would you like to count?" Child: "One, two."

3. Place the third rod in front of the child. "This is three. One, two, three," (touching all three sections, one color at a time). "Would you like to count?" Child: "One, two, three." 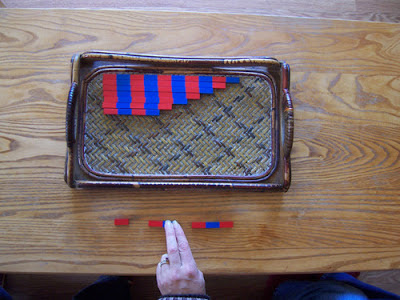 *Help the child to count the number rods with their open hand with palms down, touching each section, one color at a time, from left to right, from red to blue.

1. Ask the child, "Give me the two please," child counts the Number Rods looking for the two rod, and hands you the two rod. "Thank you." Say to the child, "Let's count it. One, two." (Remember to touch the colors as you count.)

2. "Give me the one please," child counts the Number Rods looking for the one rod, and hands you the one rod. "Thank you. Let's count it. One." (Remember to touch the colors as you count.)

3. "Give me three please," child counts the number rods looking for the three rod, and hands you the three rod. "Thank you. Let's count it. One, two, three." (Remember to touch the colors as you count.) 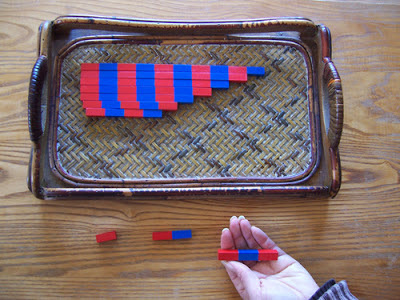 You can go on to the next three rods (number four, five, and six) if the child is interested, or wait until the next day--but review the rods you introduced the day before.

Should You Refrain From Talking During a Lesson?

Hi Lisa! I have read that during a Montessori presentation the teacher should not speak to not distract the child, and when the child is working the adult should not interrupt him. My question is: when and how is the language introduced? For example for cylinder blocks: thick and thin. Thanks in advance, Sandra


After having a child with Down syndrome, who has severe language delays, I am not so strict about this issue of not talking to the child during a presentation. My son needed a lot of language! Repeated over and over!

I think there is a separate issue about interrupting a child when they are working on a material independently (and you are not giving them a lesson).

But when you are giving a lesson, language can always be included. If you are doing the knobbed cylinder block, for example, just point to the cylinder, touch it lightly and say "thick" then ask the child to touch it and repeat "thick." Do the same for "thin."

And let those concepts guide you through the day by pointing out thick and thin food or objects (thick banana, thin cracker for example).