A Mom's Battle of The Toothbrush With Her Tot 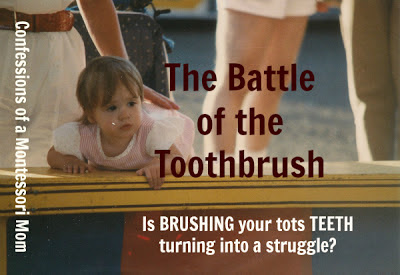 A Mom's Battle of The Toothbrush With Her Tot

What should you do when your little one no longer wants you to brush her teeth and gums! A concerned parent emailed the following issue with her young child:

My only child is 19 months old and has recently begun resisting getting her teeth brushed. She used to put the brush in her mouth on her own at first, then I'd brush her teeth before we were "'done'". Now she doesn't want to hold the brush and will turn her head, push her tongue out, and press her lips down. I try making funny sounds (she'll laugh and open her mouth but it's short-lived) or finally pin her down and get it done. Am wondering if you have any thoughts about my only child.

When my son started to resist getting his teeth and gums brushed, I stopped. I let it go. I gave up the fight. Why? I wanted him to LOVE brushing teeth, not hate it!

My husband was oh-so-concerned about this decision. But I felt like pushing the issue (of cleaning his teeth) could turn my son off to the whole idea of brushing his teeth forever and ever and ever, and then where would we be? In the dentist's office with problems galore!

So I let him do it himself, I gave him fun flavors of toothpaste including non-fluoride. I had a score of toothbrushes to hand him after each mealtime, but I did not interfere. Over time my son began to LOVE brushing his teeth! It was his job, not mine, even though he was not actually brushing his teeth but sucking and chewing on the toothbrush.

I chose to fight OTHER battles instead, like keeping my son's glasses on! I felt like that was more important at the time. (He's been wearing glasses since he was six months old; and not until age four did he finally give up the fight and keep his darn glasses on all the time.)

(Please note how important it is to get regular checkups from your dentist, which is what we did at the time of my son's resistance to me brushing his teeth, and that it was an issue of control and not 'sensory', and that our dentist was aware of the situation. And what I sometimes did was try to brush my son's teeth when he was asleep! It did not always work!)

So what's happened with teeth brushing when he got older (like age four)? He let me brush his teeth, once a day, at bedtime. And it was not a battle! (It helped that I counted to twenty because he was really into numbers.)

When he got older, he STILL did it himself, and he still loved it, so much so that he used to sneak into the bathroom to... no, not flush the potty over and over. No, not pull all the paper off the toilet paper roll. No, not dump the trash on the floor. He snuck in there to brush his teeth when no one was watching!

As parents, we have to decide which battles to fight. I chose not to fight this one. It took a few years of letting go, however, but I was confident we would both win in the end!

Footnote: our dentist appointments were very helpful! Our son did not have any issues with his gums or his teeth. However, I knew there would come a day when the dentist would tell me to get in there and brush my son's teeth, I put off that day for a long time. And now that I take a turn to brush his teeth once a day, it is not an issue.

So what's the moral of the story? Give up a battle today to win a war tomorrow (and check in with your child's dentist!). ~Lisa Nolan


Linking up with Montessori Monday!