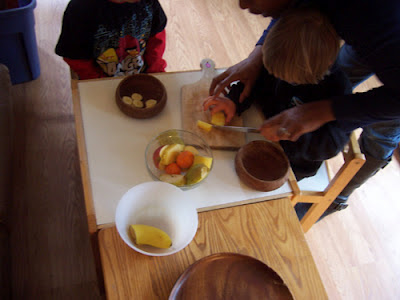 What are your thoughts on correction for the special needs child? I think along the way "correction" has been mixed up with "interrupt." In order to correct a child, you have to interrupt him or her. Sometimes it is OK to interrupt a child to correct him, sometimes it is not. It really is subjective! And you don't want to always interrupt a child to correct him or her! But you don't want to allow a child to, for example, continuously hold a pencil incorrectly. Sooner or later you may have to make a correction.

The reason behind not interrupting a child, generally, is you disrupt their learning process, who's not to say the child is thinking, "Hmmm, this pink tower doesn't look right, I wonder if I try it this way..." We want the child to explore materials and learn by doing, over time (or by watching other children).

What we did in our classroom was make a note to "represent" a Montessori material to a child when we felt it necessary, rather than interrupt them at the moment.

Often other children, the older ones typically, would step in to correct another child.

Another method we used in our classroom was group lessons: let's say some of the children were not putting their rugs away properly, we gave a group lesson at circle time.

With special needs children, you need to literally give hands-on help.

When my son was 5 1/2 he still had trouble holding a pencil correctly. He needed to be corrected every time he held a pencil incorrectly.

Children with Down syndrome can take over a thousand or more repetitions to learn things a non-DS child would in ten or a hundred repetitions. If they repeated it (incorrectly holding a pencil for example) a thousand times incorrectly, imagine how hard it will be for them to unlearn the incorrect way!

Parents often struggle with this issue of correcting the child and having to interrupt her in the process. It is best to observe, first, rather than jump right in. But if you have to jump in, say, "May I have a turn?"

Another topic this brings up is helping a child whom you see struggling.

I can't tell you how many times I've wanted to run to my son's rescue when I saw him "struggling" with getting shoes on, putting a top back on a puzzle box, or eating with a fork... He insisted on doing it himself 99% of the time! And nine times out of ten he did it! He is the type of child who wants to struggle through his problems! Who am I to say he can't!