A Snuggle Sandwich: how we struggled to start our day 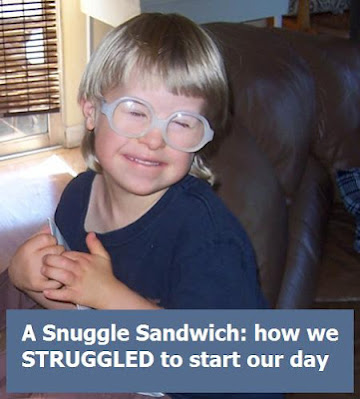 Mornings were tough. I got five or six hours of sleep, woke up tired, cranky, and in a bad mood. I was hungry, too. Plus, my son was REALLY, REALLY poopy when he rose. But did he want his smelly, stinky diaper removed? No! He avoided getting changed at all costs. Eventually, we got it done (not before he fussed and protested and fought me).

Eventually, I left the room and walked downstairs. Then he played the crying game. That's when I asked him from the bottom of the stairs, "Are you ready to get your clothes on?"

By this time my stomach was growling so loud, it could wake the neighbors.

And I needed caffeine!

Getting dressed became one more battle, like trying to put clothes on a swinging monkey in a tree... but we mustered through it.

That became the protocol. (I tried it every which way, believe me!) And the deal was this: no activities, no breakfast (what he wanted FIRST thing in the morning) until we changed the diaper and got his clothes on.

And because my son was three, he was in the "Sensitive Period for Order," so the more we followed the same "order," the easier it got, and the more he complied.

Eventually, he started getting up REALLY EARLY at 6 a.m. But I was not ready to start the day!


I learned to tell myself  This too will pass, this is impermanent. It was my new mantra I got from that spiritual guy who wears the sparkly red glasses on PBS, Depak Chopra.

At 6:30 I gave in and went into his room. Still too tired to start our orderly morning routine, I grabbed a pillow and a blanket and laid on the floor.

At first, he'd climb all over me like a seal on a rock, pulling at my hair and my blanket. But soon he got it! He was not ready to start his day, either (the diaper battle, the getting dressed chasing crying game) so we ended up snuggling for about twenty minutes.

Snuggling each morning became a new addition to our morning gig. Why didn't I think of it sooner? I don't know. Maybe being sleep-deprived had something to do with it.

And on the weekends, when dad was home from work, we all made a snuggle sandwich, after a diaper change. And I must confess, I liked it and it put me in a better mood. So I grew thankful for every (stinky) minute of it.

Yet there were days I wished he was 13 instead of 3 (no more diapers and he could dress, and make his own breakfast). But I know when he turns 13, I'll pray he was 3 again, and we could start our day with a snuggle sandwich.