Infants and Late or Not Crawling 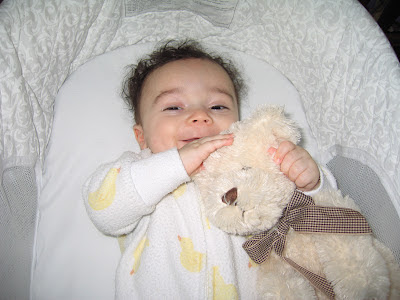 What to do about late crawlers? Infants and late crawling: I get asked this question more than a few times!
It is good to encourage at least ten minutes of tummy time several sessions a day by placing your infant on her tummy.
Many infants are sleeping on their backs because of SIDS, and as a result, are more likely, over time, to get fussy or not like being placed on their tummies when they are out of the bassinet, crib, or of their mattress.
While your infant is on his tummy, try to entice movement with various baby-safe objects placed in his line of vision. Perhaps add some musical objects because you might not be aware of any visual issues with your infant, and may want to get his eyes checked out.
My son got his vision checked as young as five months and started wearing glasses at six months! But that was more predictable due to his Down syndrome. Usually, the issues with eye-crossing, etc., clear up by five or six months... but there are other issues that might not come up until much later, like having no depth perception--which my son also has or doesn't have; and this was an issue for him in his development.
So check with a pediatric ophthalmologist about any issues with vision.
Back to crawling: try musical objects to entice your infant to crawl and move across the floor, in case eyesight is an issue, but also there is an attraction to new sounds in infants!
Two things that also help late crawlers:
1. Infant swim classes: Is there a pool nearby that offers infant swim? A YMCA or a JCC? Or is there a gym that you can join monthly, with a pool? Infant swim is very helpful to infants and gross motor development (my son did not crawl for a very long time but crawled almost instantly after his infant swim classes). The infant swim is especially helpful for infants who slept on their back, who did not get much tummy time, or like your infant, had reflux.
2. Second, have your infant around other infants who do crawl, maybe join a local mother's club and some playgroups, or a co-op nursery, perhaps an in-home daycare with crawling infants, a few mornings a week...
3. You can also try placing him on a towel (on his tummy) and gently sliding him around a smooth surface, as well as tugging the towel.
~Lisa Nolan