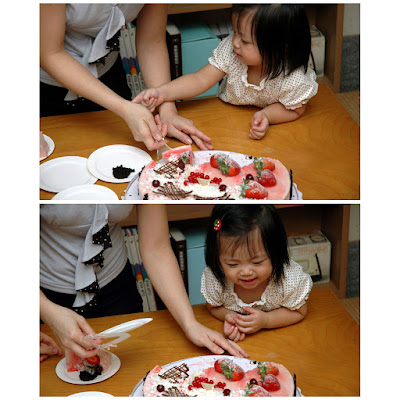 This might bit a bit irrelevant but will like to know what is the Montessori way of teaching toddlers to sit throughout mealtime. He will play with his food after he is about half full and will either ask me to feed him the rest or he will just go running around.

Two things: when he begins walking around, and or plays with his food, mealtime is over! Period. Your toddler will cry, scream, throw a tantrum, say he isn't finished, but he is, he just doesn't realize it. It is actually a learned skill, their bodies know they are finished, but not their brains, so to speak.

To avoid this situation, give your toddler less food or smaller portions (we were always asking parents at our school to send less food!). Preschoolers eat like birds! They become more interested in being social!

But the Montessori aspect of mealtime is showing the toddler how to put his food away and clean up--and he is in the sensitive period for this!

Now this will take a lot of time! Be patient! And again, your older child will be the role model!

Let's say it is lunch, your toddler is running around, and you say "Lunch is over!" And he comes running to you crying! You ask him to help you! "It's time to clean up!" (Say it with a smile!) But prepare your environment, first the week before, and show your older child what you are doing and why! Have a place for your children to bring their plates, cups, napkins, etc., as well as a sponge and little whisk broom and a trash bin, and a recycling bin.

You can use paper plates for throwing in the trash, or plastic plates for putting in the sink, allow your children to carry their plates, as well as access to the garbage and recycling bins, then they can go back and get their cups and place them in the sink, or on the counter (and you will need a stepping stool so they can reach the counter). Then they can get their napkins and put those away. Lastly, they need to be shown how to clean up crumbs and spills with a sponge, towel, whisk broom. Your four-year-old should do well enough so that you can help your toddler for the next three to six months, one-on-one. It often helps sing a little song while you clean up!

If your toddler resists or shows no interest, have your older child help him, or show him by just being a good role model 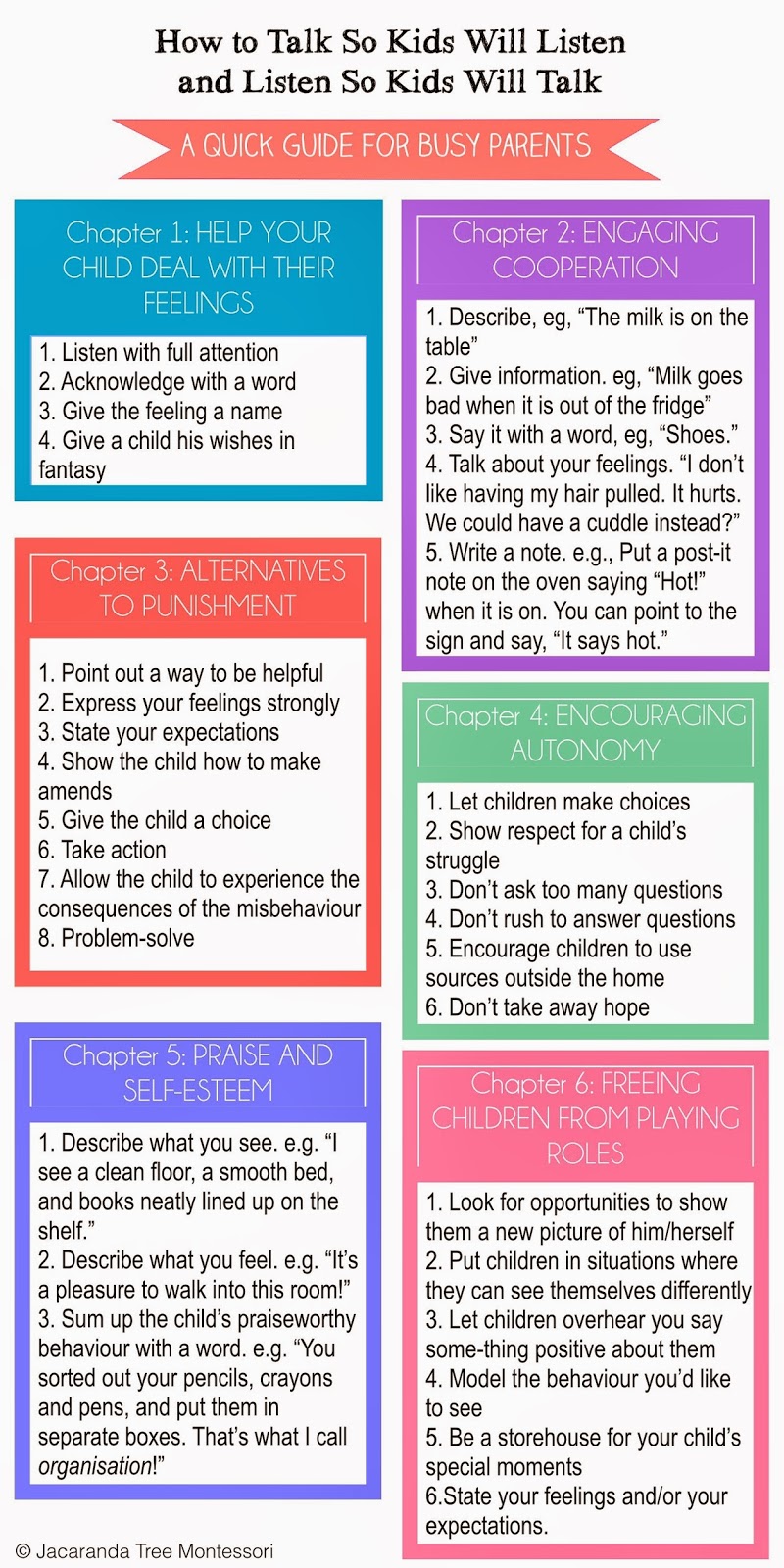 How to Talk so Kids Will Listen and Listen So Kids Will Talk by Simone Davies of Jacaranda Tree Montessori How to talk with children is a lesson we all seem to need. Even as infants they learn from how and what we say to them. We are thrilled to have Simone Davies back with us to walk us through the How2Talk2Kids method of communicating with our children.  It ’ s a pleasure to be back guest blogging here. I love the energy of this group and your passion and interest in incorporating Montessori in your homes. I ’ m exactly the same. When my children were born (already 12 and 13 years ago!), I wanted to learn a different way to be with them. I didn ’ t want to force learning into them; I wanted to discover and explore the world together and guide them along the way. But I found my communication skills lacking. A repertoire of “ good girl/good boy ” or “ what a great job ” or “ don ’ t worry, it ’ s just a scratch ” came flowing out of my mouth in the same way we had b 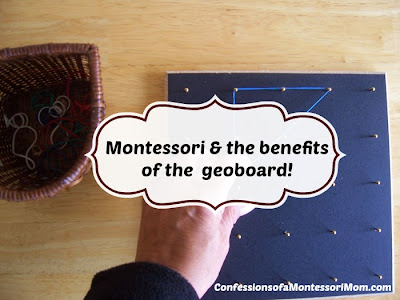 Montessori & the benefits of the geoboard!

Montessori & the benefits of the geoboard! The geoboard is one of the most beneficial materials in a Montessori classroom and home. It is both a Practical Life activity and a Sensorial activity, depending on how you use it (present it to the child). Practical Life "All the practical life activities, in addition to improving hand-eye coordination and muscle control, are designed to increase the child's ability to concentrate [and to also go from left to right, and from top to bottom]." Montessori on a Limited Budget by Elvira Farrow and Carol Hill Practical Life Introduction from my Montessori training manual: "Exercises in Practical Life are given the greatest importance. Exercises in Practical Life help the child mainly in his efforts to adapt to his limited space, his group, and to achieve independence. They answer his need expressed by "Let me do it by myself." They are excellent for the toddler old who is struggling to bring his psychic 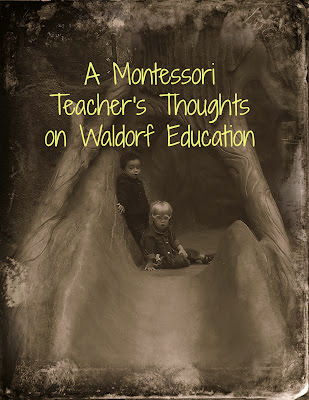 A Montessori Teacher's Thoughts on Waldorf Education As a Montessori 3-6 and 6-9 trained teacher, I have a lot of respect for Waldorf education, even though I was drawn to (fell in love with!) Montessori at a young age (23). And as a Montessori teacher, I have recommended it for a few children (usually two students per year) who were graduating from our 3-6 classroom, because I (we) felt it was a better choice for those particular children. Their interests, or should I say passions, were not with the Montessori materials, and certainly not academics like phonics and simple math, but instead they loved arts, crafts, practical life, the outdoors, and botany. One of the attributes I like about Waldorf is its sensitivity for the development of the WHOLE child: mind, body, and spirit. Also, there is a lot of emphasis on fine motor (like weaving, knitting, sewing), nature, cooking, playing, arts and crafts, large motor play, storytelling, poetry, songs, critical thinking, and literat 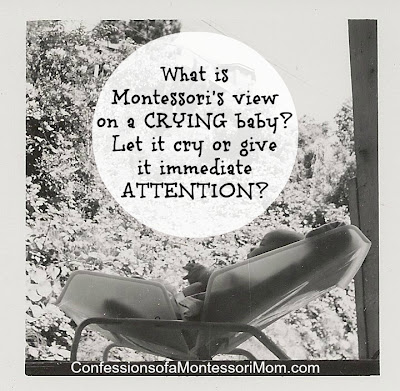 Montessori's view on a CRYING baby: Let it cry or give immediate ATTENTION? I have a three-month-old infant in my daycare who cries when he is not picked up.... His mother said that she lets him cry until he goes to sleep, she does not pick him up, as long as he is fed and dry. What is the Montessori view on this matter? Montessori philosophy supports the concept of allowing infants, toddlers, and preschoolers a time for frustration. That is to say, we should not run to a child's rescue whenever we see him "frustrated" (which is very different than crying!) because we need to allow him time to "work it out" on his own. But this is not the case with a three-month-old infant: they are not crying out of frustration because they are trying to turn over or crawl. It begs the question, should you let a crying baby cry or give it immediate attention?  I am not talking about infants and falling sleeping, that is a separate issue! One (old/traditional) sc 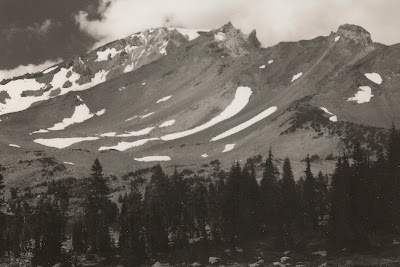 In a Montessori environment, the study of a continent (for ages 3 to 6) entails introducing activities in Geography, Zoology, Botany, and Culture, to name a few. Today we are going to look at the continents of Arctica and Antarctica. When we think of these continents at both ends of the world, we think of ice and snow. So the very first day or week of activities to introduce to your home school or classroom environment are Sensorial activities and should include ice (and snow if you live near snow at wintertime). The following are Arctic animals, and ice cube and snowflake activities from around the Internet: Snowflake Matching Cards Snowflake Cut and Paste booklets "Iceberg" Activity Arctic Animals Books Melt an Ice Cube Game Don't live near the snow? Try this "Make your own Fake sensory snow that feels real" activity. The second day or week the set of activities to introduce would be Practical Life , like feeding and caring for a pet. But