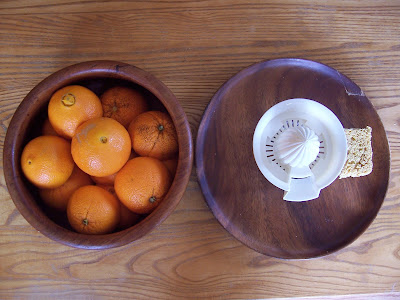 We are making orange juice and having a tea party! Come join us! I pre cut the oranges in half and placed them in a wooden salad bowl. I bought an orange juice squeezer on sale at Raley's for $3.19! The wooden tray is a hand-me-down, (we use it a lot); and there is a sponge for wiping.  (Warning, buy juicing oranges, like Valencia oranges! We used regular naval oranges because I had a whole bag of them and did not want to go out and buy more oranges for juicing, but naval oranges are very hard to squeeze, and don't make as much juice! I should also mention we planted a dwarf orange tree! But that's another blog post for another day!) 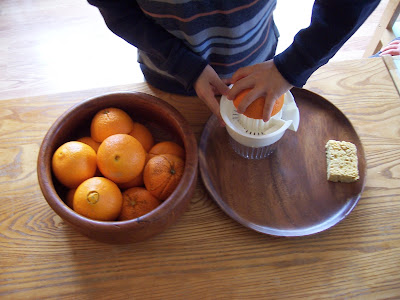 Here our guest, my son's buddy, JG is squeezing an orange half. I recommend using a dish cloth instead of a tray! This wooden tray, although it looks nice and can catch juice spillage, is too slippery when pressing down and squeezing. Next time we'll squeeze without it... 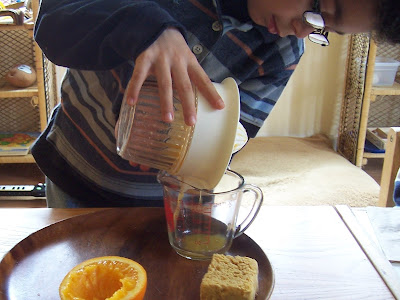 Now JG is pouring his juice into a glass measuring cup, which we use instead of a tea pot, for the tea party. (A teapot would be too difficult for my son who has Down syndrome--but some day!) I and JG's mom also have a turn "re-squeezing" the naval oranges once we realized, bad idea! Should have bought juicing oranges! 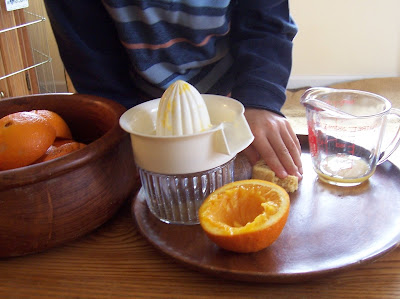 JG is using the sponge for wiping spills... 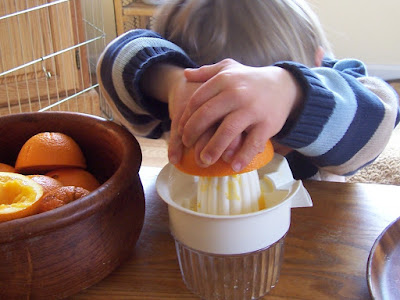 Now it's my son JN's turn! (We had to take the tray out from under... because it was too slippery for him when he tried to squeeze the oranges.) Notice he is bending down to squeeze... but not getting much luck with it! What to do? 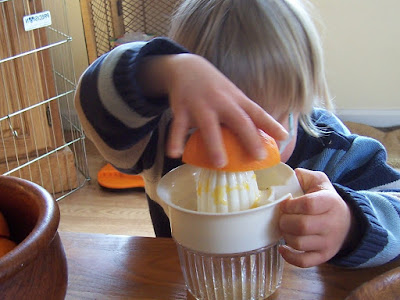 Hmmm, maybe if he uses one hand and holds the container with the other hand? My son is persistent! He does not give up easily! (Which can be a pain, but also a blessing!) 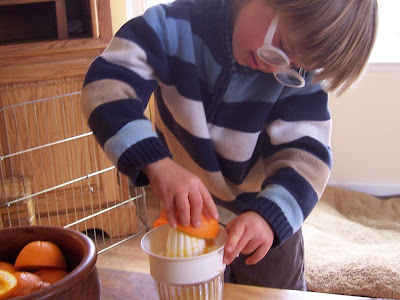 My son decides to stand up again and use one hand on the orange and one hand on the container after his friend JG just showed him how. (Because goodness forbid Mommy should show him LOL!)
That's better! Now we're talking! He is now able to squeeze and get some juice out of that orange. Go to my online gallery to read the rest and see lots more pictures!
~Lisa Nolan