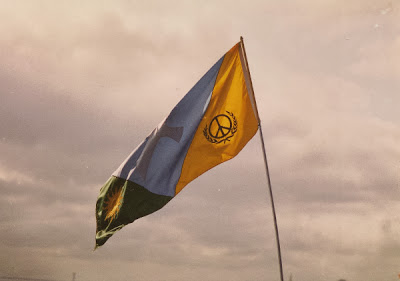 The essentials of education for peace are built into the Montessori curriculum at every level.

At the preschool stage when children are in an absorbent state of mind, they are exposed to the Continents of the World and the Peoples of the World, thus providing the basis for a global view of life and humanity's part in it.

At the elementary stage, students are in a reasoning, abstracting, and imagining state of mind. The Peoples of the World are studied in-depth and from a historical perspective, with the help of timelines (6-9 Elementary History Curriculum), leading to the discovery that all humans have the same fundamental needs (Geography Curriculum) and that the fulfillment of these needs varies according to the potentialities present in each given geographical environment and historical era. By emphasizing the family of humans and the interrelationship of all life, students begin to realize that the individual is not an isolated, fragmentary entity separated from the life around him but rather an integral part of a potentially harmonious whole.

At the Erkinder stage (12-18 years), students who are now in a social, moral, and ethical state of mind are ready to explore the larger community and begin to find their own place within it. During this period they move toward a true "valorization of personality": a realization that everything in the universe is interdependent and that each individual has a function to perform which serves the whole. Their own relationship to life is reinforced through their academic studies: at this time they bring to consciousness all the microcosmic and macrocosmic analogies Montessori uses to illustrate the interdependence of everything that exists, from the concentration of energy which induces cells to specialize and to reform the function of the organ they are about to construct, through the lichen which eat rocks and give their life so that mosses and grasses can take root in their remains, to the great river of life; commerce--the exchange and sharing of goods, which, like the blood circulating in the body and servicing all parts of it, binds all nations together. . . .

Now on the threshold of adulthood, students are exposed to actual involvement in the larger community. Self-expression and cooperation with others are the keys to their educational experience. Their activities include large group discussions, which were started in the previous period, with the addition of training in the classic art of debate. On a local level they are exposed to other peer and adult groups, be they of an artistic, economic, athletic, or political affiliation. Nationally and internationally there can be correspondence and visits with similar groups. . . . In all such activities, the goal is to create concrete experiences of conscious, non-competitive cooperation and collaboration with others.

It is during this period that we, as teachers, parents, and homeschoolers are challenged to the core. We cannot begin to teach cooperation and collaboration if we ourselves are interacting with others in a competitive way. Despite the content of the Montessori curriculum, it cannot in and of itself result in peace. We as adults must remain aware, at every step that our function is not simply to talk about peace, but to create an environment that will promote the evolution of peaceful individuals and will allow for the "normal development of the new person." We must reach beyond our efforts toward education for peace and venture into the virgin territory of education as peace.

All too often, given the natural everyday pressures of our work as teachers and administrators, parents, and homeschoolers, we tend to lose sight of the immensity and inspiration of Montessori's fundamental vision concerning education. Education is not, in her view, simply one component in the overall operation of society; it is, rather, the very heartbeat of life itself. Montessori's contribution to education goes beyond the creation of new techniques and curricula; it involves, in essence, a redefinition of the function of the educator herself.

Either education contributes to a movement of universal
liberation by showing the way to defend and raise humanity
or it becomes like one of those organs, which have shriveled
up by not being used during the evolution of the organism
(Montessori, The Formation of Man, 1976, p.18).

Education is not simply a matter of developing manual and intellectual skills; it involves, in fact, the creation of a new person--a new type of individual who can consciously and creatively further the evolution of the entire species. This may sound like a lofty ideal, but what it involves, essentially, is quite simple: that each of us discovers our own unique value and dignity by finding our function in life [our inner promptings] and "doing our own thing." Thus, fulfilling our potential, we valorize our personality and make a conscious contribution to the whole of life. (A human is the only being who can make such a conscious choice; all other entities, be they animal, vegetable, or mineral, are limited in their being and have no such choice. For example, the bee following its compelling instinct seeks the nectar of the flower, not being conscious of the fact that during the process it is pollinating and thus contributing to the whole of life.)

In speaking of the educational movement that was developing around her, Montessori once remarked: "For the word 'method' we should substitute something like this "'Help given in order that the human personality may achieve its independence'" (The Formation of Man, p. 8). The independence of human personality that can be achieved through education is not restricted to children, to students. Adults who honestly help children toward liberation will, in the process, work toward their own liberation as well:

A reform of the adult will accompany it [self-actualization
of the child] step by step because an obstacle in the adult
will have been removed. This reform of the adult is of
enormous importance for society as a whole. It represents
the reawakening of a part of human consciousness which
has been covering itself progressively with layer upon layer
of impediments. . . . "Consciousness" has been dimmed, not
in some adults-only, but in all adults (Education and Peace, p. 68).

The reconstruction of human society that Montessori envisions is based, therefore, on the transformation of the individual. Adults who set out to educate children must, at the same time, be willing to educate themselves.

For Montessori, education represents the most powerful and universal potential for a thorough reconstruction of human society--which demands a transition from an ambiance of war to an ambiance of peace. Greed, envy, competition, etc., which lead inevitably to hostility and war, can be replaced by generosity, cooperation, and mutual support, creating an atmosphere of peace. This is not simply an idealist's dream, but a practical long-range goal that each human being can either work for or work against. And not moving actively toward this goal is to let it slip further and further out of reach.

Education as peace demands that we practice what we preach. This becomes particularly evident at the Erkinder (12-18 years) stage when students begin to challenge the ethical standards and behavior of adults. The least trace of hypocrisy on the part of adults shatters the students' trust and thereby blocks their own natural evolution toward harmonious interaction with others. We, as adults, cannot afford to lose touch with our own education, which--as Montessori has pointed out--demands self-honesty and inner transformation. This process, although more dramatically demanded at the Erkinder level, is, in fact, essential throughout Montessori education.

On the preschool level, the teacher, parent, or homeschooler provides a dynamic link between the child and the environment, neither interfering nor correcting but simply channeling and directing energy by demonstrating [the materials and lessons] with slow and precise movements. During the elementary stage, the teacher, parent, or homeschooler becomes an enthusiastic but firm leader who keeps the child's flame of interest for the cosmic view glowing, while making absolutely certain that she is, at the same time, perfecting her basic skills. At the Erkinder stage, the adult becomes a moral and ethical sounding board, model, guinea pig, and scapegoat, who must be totally honest and vulnerable in sharing her views and convictions with her students and children.

Consequently, we as adults must be able to dare to take an honest look at our own values and attitudes. Are we preaching peace in the classroom or at homeschool and waging war at home? Are we open and loving toward our children but envious of our colleagues? Are we cooperative with our immediate colleagues but competitive with the personnel of other schools or branches of Montessori? If we are hypocritical in our own behavior, we cannot claim to be educators of peace. Our students and children learn not only from what we say but also from what we do and what we are. If we want to make our own individual contribution toward the reconstruction of human society, we must be humble enough to take a critical look at ourselves and to be ever willing to learn from those we hope to teach.

The child's psychic energy, once awakened, will develop
according to its own laws and has an effect on us as well.
The mere contact with a human being developing in this way
can renew our own energies. The child developing harmoniously
and the adult improving himself at his side make a very
exciting and attractive picture (Education and Peace, p. 69).

Education as peace is not always a comfortable or immediately comforting process. But real growth inevitably entails a degree of pain and struggle. Certainly, we recognize this fact in relation to our students and children; but can we accept it also for ourselves? Can we more and more, as adults, support one another as well as our students and children in this ongoing process and relate together in a spirit of cooperation rather than competition?

Perhaps each one of us can take some time apart to remind ourselves of the Montessori vision of the function of education--a vision both vast and exceedingly simple: to work together toward the liberation of every individual, that we help one another--whatever our age or role--to discover and to be ourselves, contributing what we each have to offer to the peace and harmony of the whole.

This is universal in scope. It aims at the deliverance
of the whole of humanity. Much patient work, I repeat,
is needed along this road toward the freedom and
"Valorization" of mankind (The Formation of Man, p. 20).